R is a programming language meant for statistical computing and data science.

R programming is a software supported by R foundation for statistical computing and non-profit making organization.

Being a statistical software package, it has increased in popularity among data scientists and data miners who use R for data mining surveys and data analysis. Its source code was primarily written in C, Fortran and R languages.

R programming is freely available for the public under a GNU license. R has pre-compiled binary versions for common operating systems.

R can be run in the command line for terminal nerds and graphical user interfaces in integrated development environments. Today, I am going to list down 11 best R programming IDE. Have a look at them below!

RStudio was developed by RStudio Inc. founded by JJ Allaire.

RStudio is available in two formats, the one run locally as a desktop application known as RStudio Desktop and RStudio Server which allows access to RStudio through a web browser while running remotely on Linux server.

RStudio is available under a free GNU AGPL v3 license, an open-source license that guarantees freedom for sharing the code.

RStudio is available in the pre-packaged distribution for Windows, Linux, and macOS, while RStudio Server can run on Ubuntu, Debian, Linux, SLES, OpenSUSE and CentOS.

Visual Studio being a powerful IDE for coding has brought along amazing experience for R programmers.

You can now enjoy features of IDE even when writing R programs with the newly released RTVS a product released by Microsoft under free and open-source MIT license.

Rattle is a popular graphical user interface for data mining in R programming language. It presents visual data summaries and the statistical data and it can model and transform data in supervised and unsupervised machine learning models.

The beauty of Rattle is its main feature which captures GUI interactions in R scripts executable in R independently.

StatET is an eclipse based IDE for R programming.

It provides a set of unmatched tools for R code writing and package building. Features include integrated R console, Object browser, and R help, and its support for multiple local and remote installations.

StatET is a plugin for Eclipse IDE, therefore it can be combined with a range of other tools on top of Eclipse platform.

StatET is an open-source software that runs on most operating systems.

ESS is beneficial when used by professionals who analyze text-based scripts in different operating systems. It provides a more sophisticated graphical user interface.

Tinn-R is a text editor or word processor, ASCII & UNICODE for Windows operating system, with integration with R.

It has user interface characteristics and at the same time an IDE characteristic. Its sole purpose is to facilitate learning R and provide an environment for statistical computing. 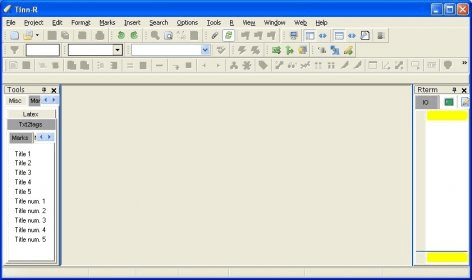 It has an intuitive user interface with advanced R features for R experts, which allows for the sharing of analysis processes amongst several users of different R proficiency levels. It works on Windows, Linux and Mac operating systems.

It is available for free under the GNU license.

Radiant is an open-source and platform-independent browser-based interface that is used for business analysis in R programming. It is based on the Shiny package with the option to run locally or on a server. Radiant was developed by Vincent Nijs.

RBox is an integrated R package for the Atom editor.

This package has a collection of several packages for running R on Atom editor. Its features include the ability to use Hydrogen to execute a line, a selection and a block of code at a time.

It has access to several terminals and has useful snippets for running R. RBox is available under MIT license.

NVim-R is a plugin for Vim to work with R programming.

It improves Vim’s support for editing R code. It has Omni completion for objects and function arguments for R.

It has the ability to see R documentation in Vim’s buffer and it is highly customizable.

R programming is one of the popular statistical and data mining language available and it is open-source, it makes sense to you as well choose an open-source IDE.

R is supported by numerous IDEs, some were purely designed for R environment like RStudio while others are universal editors and gains support for R through plugins.

Whatever the case, choose an IDE that will best meet your requirements and you are familiar with.